I appointed you to go and bear fruit, fruit that will last, so that the Father will give you whatever you ask Him in my name.  I am giving you these commands so that you may love one another. John 15:16-17 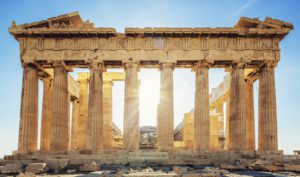 I suppose one of the central questions, with which the student will grapple during their time at university, is what they are called to do afterwards- their ‘vocation’, in the vaguest sense of the word. Whether undertaking a three-year or a four-year course, the topic will inevitably confront the student as they approach the end of their degree. When I came up to Oxford at the start of my Classics degree four years ago, I- like many other students, I suspect- knew only that I wanted to learn about the ancient Greek and Roman worlds, in all their complexities, but had little sense of how I wished to use my degree beyond that. Yet the time I have spent as part of the Oxford University Catholic community has greatly assisted in my sense of direction, or ‘calling’, towards becoming a secondary school Classics teacher.

I began my time in Oxford as a shy fresher, who only really came to the Chaplaincy to attend Mass each Sunday- but with each successive year of my degree, I found myself increasingly engaged in the community, becoming a college representative in my second year and Newman Society committee member in my third and fourth years. These experiences, of course, were valuable for the church communities in the university, first and foremost- it was important that Mass should be celebrated in the student’s own college, and that the Catholic faith should be promoted and nourished as widely as possible- but these acts of service also made clear to me that helping others was something that I really enjoyed, and earnestly wished to pursue. It was a tremendous pleasure to greet people as they came to Mass each Sunday, to act as an extraordinary minister of the Eucharist, to work as a team to organise large-scale events, and above all to form friendships with fellow students, to support and encourage them. God was, shall we say, ‘opening up’ areas of myself, through these opportunities to offer kindness and welcome to those who sought Him.

As I move forward in my life, I am extremely grateful for the plethora of positive experiences I have gained from the time spent at Catholic Chaplaincy over the course of four years. The opportunity to attend Mass, to pray, to be immersed fully in Catholic student life in the university, has been phenomenal- I have been enriched, both spiritually and personally, by these encounters. I am now excited by the prospect of being able to utilise these gifts for the benefit of others– that I might help the students of the future not only by passing on the knowledge I have gained about the ancient world, but also by supporting them as they, too, mature and develop. God calls all of us, in our own way, to share His love for us with whomever we meet.